So I was able to finally roll my truck into the shop today. Just getting set up and started is always the hardest part on these projects it seems, but changing the NV4500 transmission in my ’93 GMC 4X4 actually looks like a straightforward process.

You see, the NV4500 was engineered with synchros that required a special gear oil. Many people totally ignore that requirement and just use regular gear oil or try to get away with some other replacement trying to save money. It doesn't work.

It's because of this many transmissions (like mine) have the synchros go out. I drove mine for about 6-7 years with a bad transmission until I could justify the cost to change it. So finally, here we go! 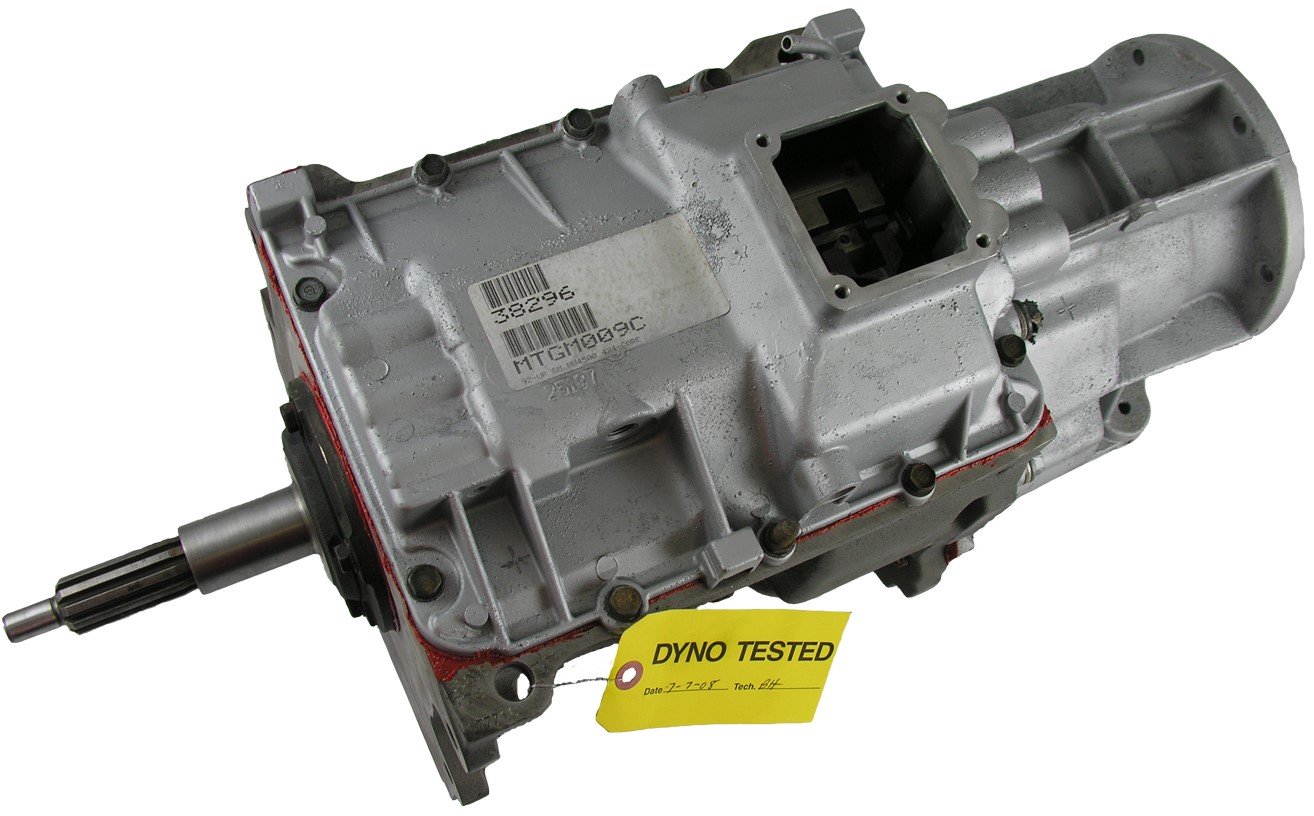 As per the Factory manual the steps are essentially to remove or disconnect;

Now Let’s Go Through The Details

And of course, things in reality aren’t so simple so we’ll go through the details here.

The first thing in any project is safety. Safety is a numbers game. If you insist on ignoring it, it’ll bite you in the ass sooner or later. And if you are a real do-it-yourselfer like me, it’ll happen sooner. So don’t be stupid, take a few minutes to get set up properly.

The primary safety item is a good, solid set of jack stands. My rig weighs 8200 lbs. fully loaded and fueled so good and solid is a requirement. I did get away with using a standard set of three ton jack stands for a while but I was really pushing my luck. I got away with it by only jacking up one corner at a time, leaving the jack snuggly under and not being under there for very long. But I was still pushing my luck so I finally invested in a monster set of 22 tonners. Yeah 22 tons. Overkill? Overkill is underrated; these things will hold anything I need anytime and anywhere. Like I said, it’s an investment; I’ll never have to buy another set for the rest of my life.

Since I’m working in a temporary shop with a dirt floor (yay me), I put a piece of plywood under the stands to even out the weight a bit.

After shopping around for several months, I settled on buying from Midwest Transmission Center in Zumbrota, Mn. Although their web site is a little rough, they seemed to really know these transmissions and when I finally called, Dan in tech support backed that up by having all the answers that I needed. Along with that, they dyno test everything, and have a 12 month/unlimited mile warranty.

These days when I need to get something done, I wait until I have the money and then I don’t skimp on quality if at all possible. You really are spending more money in the long run if you buy crap now and have to spend more money on repairs down the road or having to buy it again. Do it right the first time, be patient, save the money and buy quality once. So with that in mind, I wanted to get a new transmission rather than rebuilt.

However, it turns out that new transmissions for my year of truck (1993) weren’t available so I was stuck with the rebuilt unit.  This isn’t a bad thing mind you, rebuilt transmissions are put in vehicles every day and can last at least as long as the original. And I could still have...

I also looked into the larger main shaft and cryogenics but I had already installed a new clutch from Southbend clutch .

The first time doing any job, it’s always a good idea to take plenty of pictures to remind yourself how it all goes back together. Many times a project can sit for a while and it’s amazing at what little things you can forget in that time.

Detailing the factory steps above…

2. I removed the transfer case shifter cover for two reasons…

3. Set the cover aside, lift the bottom lip of the shifter boot and remove the four Phillips head screws holding the retainer on and pull the retainer off
4. Remove the four screws holding the boot on and pull the boot and two gaskets off
5. Using two screwdrivers, push down on the collar around the shifter stub while turning to pop it out. Here's a video that makes it pretty clear...

It came out pretty easy for me by pushing the transmission back until the shift housing almost hit the floor sheet metal, then dropped my jack just enough for the housing to clear. You want to drop it as little as possible because the input shaft is still in the engine and clutch. Dropping it too much will put too much pressure on the clutch and possibly break something.

Keep pushing back and dropping until it’s free of the clutch and then you can lower away.

There you go, a transmission at your feet!

Now the six bolts holding the bell housing to the motor can be reached. A few of them are a bolt/stud operation and the first is a 13mm nut, so take that and anything it’s holding off, then the next is 14mm to pull the bolt itself out.

The bell housing may be on pretty snug so just keep working it back and forth. Maybe take a rubber mallet to the lower part but you don’t want to pry it with a screwdriver or anything.

Always Inspect Things As You Go

Keep in mind that this is not an area of your truck that gets frequent attention. So, you want to check everything to make sure that it’s in good shape so you won’t have to get back in here!

In my case, the previous mechanic had done some real shoddy work. I had a broken ball stud (clutch pivot ball), a missing inspection cover which meant that the hardware for the ball stud was gone and they’re not available anymore (let me know if you have a good source) and it looks like he installed a used or at least very crappy quality throwout bearing.

So check all that…

O.K. so you have your new ball stud installed. Even though it can’t back out because it’s trapped in there, I still used a little blue lock tight to keep it secured.

Slobber some grease on the ball end and slide the fork onto it, grease the bushing too and slide it on the clip. If you use nuts like mine, you want to just get the first one down snug and then work the fork through its full range of motion. You can’t have anything binding up. When it’s snug but free, thread the second nut on to lock it down. Use two wrenches to lock them together without snugging them down on the fork any more. Flip the bell housing to look at the bottom, there is a grease fitting down in a cubby hole there. Pack some grease in to get the ball stud filled up. And remember that thing is there, you’ll want to push some grease in every now and then to keep your clutch ball from wearing out.
Most people don’t even know that it’s there and let their clutch system wear out before it has to.

The next step has a small but very important detail that is easy to get wrong.
Installation of the throw out bearing has been done wrong so often that they made a technical bulletin to show the proper way to install. The manual says to pack the inside groove and the groove where the fork sits with grease but it sure makes me nervous to have all the grease in there where it can spin off and get on my new Kevlar clutch so I just slobbered a bunch grease in the groove marked “A” here but then a just little where the fork sits marked “B”. And I coated the output shaft collar on the tranny where the bearing will ride and called it good. 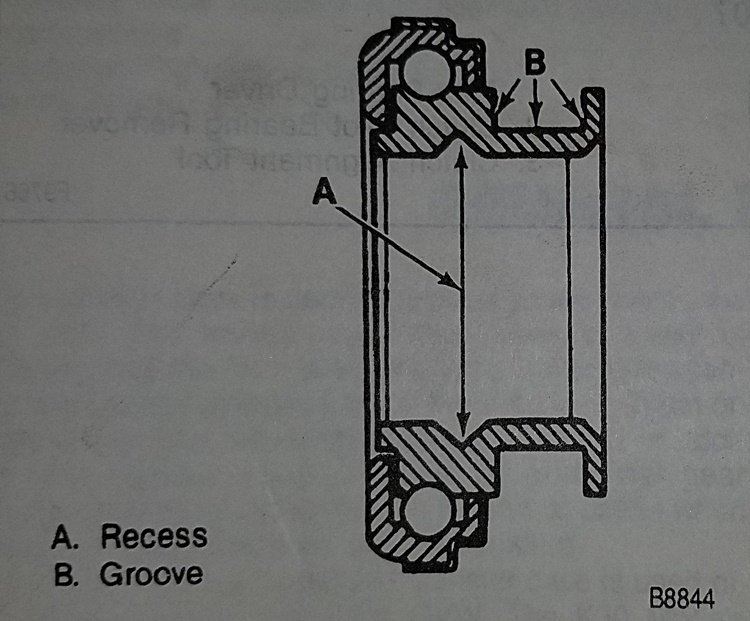 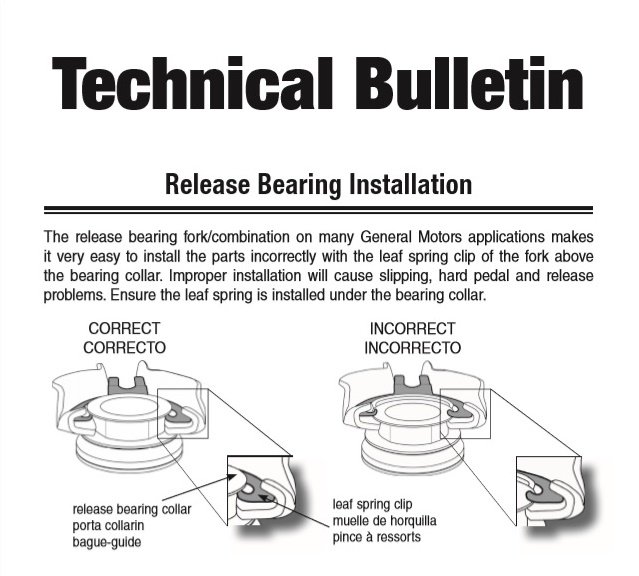 It makes sense when you see it all together.

At this point the manual shows to install the same way we took it out, by installing the bell housing first and then the transmission. And while that would make getting to the bolts easier, I couldn’t for the life of me get everything to line up properly because my version of the NV4500 doesn’t have the bolt on shifter hole so it interfered with the sheet metal and didn’t allow me to level out the input shaft enough to slide it in. So I bolted the bell housing up to the transmission and worked it in that way.

Grab that poor sucker that you’ve been using as extra hands to help you out and start working it up, bell housing first.

Take it slow and easy. Keep an eye on the shifter housing and try not to beat up your sheet metal.

Sometimes a combo of all three.

Before you squeeze it all the way in, grab your reverse light plug, reach up and plug it in now. It’s a real bugger to do it after. It’s the one all the way up by the shifter hole.

Now button her up!

Great! She’s up and in, now start the fun process of getting all the mounting bolts in and torqued down.

Put a little grease on the end of the rod and work the slave cylinder back into it’s hole. There is an inspection bolt right there in the side of the bell housing, remove that and get a good look in there at the fork so you can make sure the rod is seated into the dimple correctly.

Now just put everything back the way it was (hopefully you took my advice and took plenty of pictures).

The last step is one of the most important, pour in your gear oil. It takes 4 quarts of Castrol Syntorq GL-4 synthetic oil. You probably can’t get the Castrol any more as it was discontinued long ago but Redline has a direct replacement for it that keeps our syncros alive.

A word on the gear oil for these things. Don’t use regular gear oil! You’ll pretty much guarantee the destruction of your syncros. You need to use the synthetic oil. Yes, it’s expensive, yes it’s hard to find sometimes, but you don’t change it that often (maybe never) so it’s pretty much a one-time cost for most of us. Don’t skimp here, get the right stuff.

Before lowering it down, jump in and run it through the gears a few times to make sure that nothing is bound up. Start it up and do it again.

One little thing to look out for is that the transfer case can easily be bumped into neutral and make you poop yourself thinking something major is wrong. So double check that it is in gear.

Now lower it down, clean up your tools and go have beer! (AFTER your test drive)

What do you think of the article above? Any tips, pointers or criticisms? Leave me a comment in the box below!
Home › Maintenence › Changing The GMC NV4500
Return To Top of Page